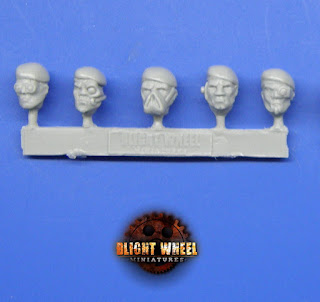 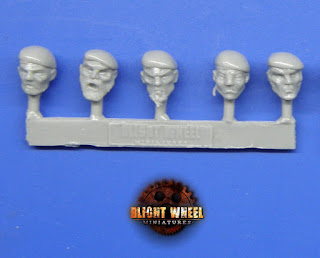 Here at Blightwheel Miniature, we try our best to make things easy for you.

We have changed our shipment costs to make them more efficient.

Due to several issues with Eastern European Post Offices, we cannot ship to non EEC European countries (Russia and former USSR). We are deeply sorry and are currently looking for solutions to resume shipping. If you have any doubts whether your we can ship to your country then feel free to send us a mail.
Publié par Blight Wheel Miniatures à 11:53 Aucun commentaire:

As promised some time ago, here is the second part of the Bionics.
It comes in the shape of two pairs of arms with 4 different hands.
And the first part of the Britain kit : the heads, 5 heads.
These set are modular and fits any metal, resin or plastic model. 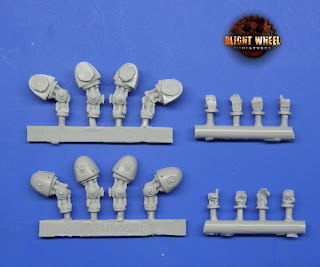 The model we are releasing today is very special to us.
It was inspired by a very dear friend that left us last June, he never got to see the complete model with its rider designed by Allan Carrasco himself.
Bruno “Old Blood” Grelier was a keen hobbyist, gamer and a talented painter, it’s under his direction that this model was made, and we dearly hope you will enjoy playing or painting it as much as Bruno would have.
Enjoy ! 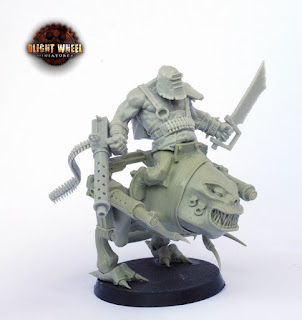 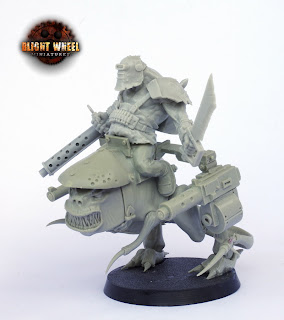 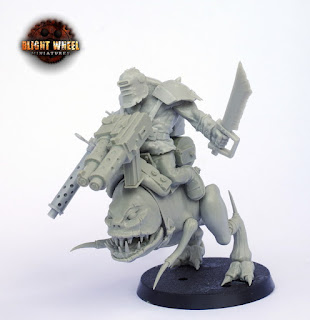 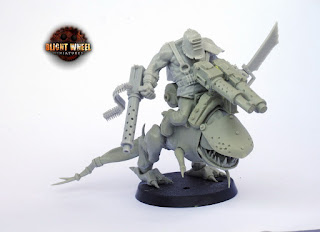 you can find some pictures of painted miniatures here by Bruno :
http://zeliste40k.fr/index.php?q=gals&idx=162

"Something is lurking in the toxic swamp"

Their recon mission took them far away from the Resistance controlled area.

The mission was to enquire on the repeating disappearance of supply convoy, but now the trail had taken them to the toxic swamps.

The first hint had been a hand-made bullet case found on the spot of the last known attack.

While they were expecting enemy vehicles tracks they found unknown animal foot prints.

Mikal relaxed somewhat, they would not be facing enemy elite troops but just a bunch of degenerated swamp mutants, one of whom had been lucky enough to find an old machine gun.

Nothing that could not be dealt with.

But now that they have reached the swamps, chances to find that groups had seriously diminished, that, and the fact that he had the odd feeling of being observed.

It was time to return to the fold.

Mikal signed the troopers next to him to turn back to base, sign that was quickly passed down the line.

“Let’s move”, said Mikal to Dana, “I don’t like that place, you and Caleb, close the line”

Dana took position the way she had been taught by the old scout, she looked around to find him but failed. Where the freg did he go? She was waiting for his signal to pull back …

She barely had a glimpse of a blood stained mess of a leg casually left on a root when all hell went loose with the staccato of heavy caliber machine guns echoing around her in the swamp.

That was not a group of mutants, no, it was one hell of a huge mutant riding a sort of fangs-ridden degenerated tadpole creature.

That bastard was shooting no less than three handcrafted heavy machine guns in a deadly storm of lead.

Will’am, Jean and Kat’ia had already disappeared in a cloud of gore, bones and innards.

The creature moved with the grace of a chopper bike on a state highway and devoured the last man of the line.

Dana stood and ran toward the creature while preparing a demo tube.

The deafening roar of the machine guns carried on and yet more body parts flew across the swamp.

Dana was close enough now and with a glancing shot she drew the creature to herself, she threw the tube at the face of the mutant, whose upper body vanished in a searing ball of orange, horrendously burning the mount in the process.

Dana was knocked down by the blast.

An eerie silence fell on the swamp.

Co’rmc came nearer to the smoking lefts of the mutant, no trace of the mount to be found.

Even half burned, the body was huge, and twice the size of a human, its skin was covered by a sort of parasite dark green moss.

He deeply hoped it was a one of a kind.

They had to leave anyway...

While Dana was helping Mikal to walk, one of his legs a mess of blood and fatigues Co’rmc was leading the way, they were down to three and the trek back to base would not be an easy one.

The beast was unaccounted for and it was surely prowling around. 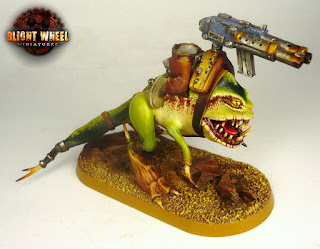 Yes it's time to change !

We modify our URL, you can access to our shop with this URL now : http://www.blightwheelminiatures.com/ 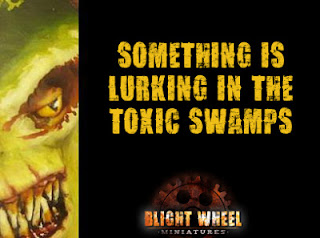